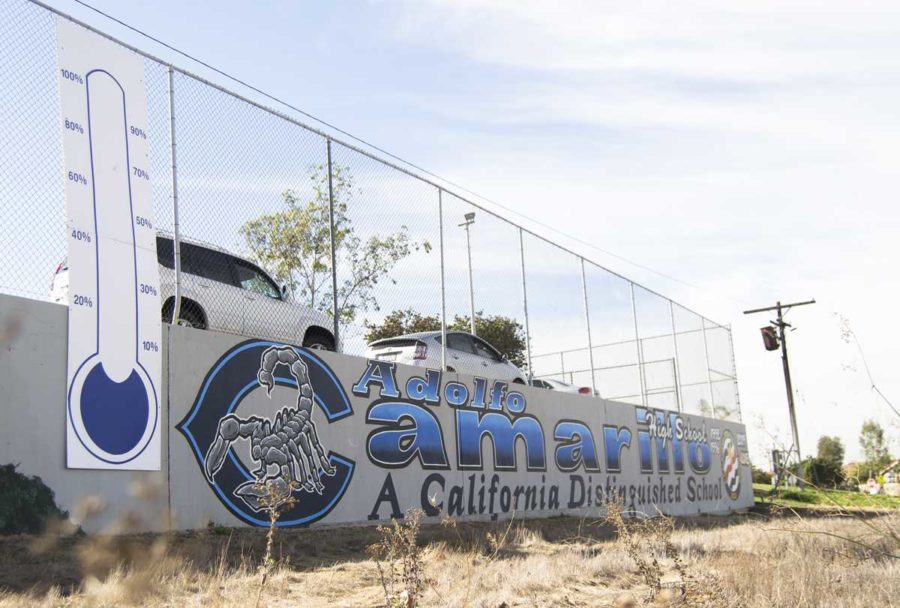 The turf donation meter in the front of the school, advertising their progress so far.

The possibility for Cam High to install a new turf field and track may be fading away as the Scorpion Athletic Booster Club is still too far from their fundraising goals for the project, needing to make up more than a $750,000 shortfall before the project can begin.

Cam High is striving toward the goal of installing new turf for the football field and track within the year. The next goal would be to install turf practice fields as well.

The total cost for a new turf field and track is estimated to be about $1.7 million. The Scorpion Athletic Booster Club is in charge of raising the money through community donations and advertisement. Outside the visitor’s parking lot in front of the school is a giant thermometer indicating approximately how much the Booster Club has raised. As more money is raised the “temperature” on the thermometer rises. So far the Booster Club raised about $25,000  for the new turf project.

“We are currently working on trying to get corporate donations because that’s what we have been missing,” said Lisa Chisholm-Duran, secretary for the Booster Club. $800,000  is the minimum the group must raise just to break ground and start the project. Their goal is to break ground in March of 2014 and complete the project by June, 2014. Chisholm-Duran said that corporate donations will be key to making up the fundraising shortfall.

If funds are raised, officials say it will be a boost not only to the community and those who use the field, but also provide long-term savings as well as environmental conservation. “I think it will save us money because we won’t have to water it or sod it all the time. Also, a turf field might lead to fewer injuries because it’s softer,” said Tom Ito, Cam High associate principal.

The new turf field and track would not only be beneficial to Cam High, but to the community as well. “I’m very exited about anything that improves Cam High,” said Jack Willard, head football coach. “I know coaching staff and students are excited about it too”. When the turf is fully installed not only will Cam High’s various sports teams be able to play on it, but so will community sports teams, such as the Camarillo Roadrunners, a Pop Warner football club. “We want everyone to be involved as well, so that we can benefit the entire community,” said Willard.