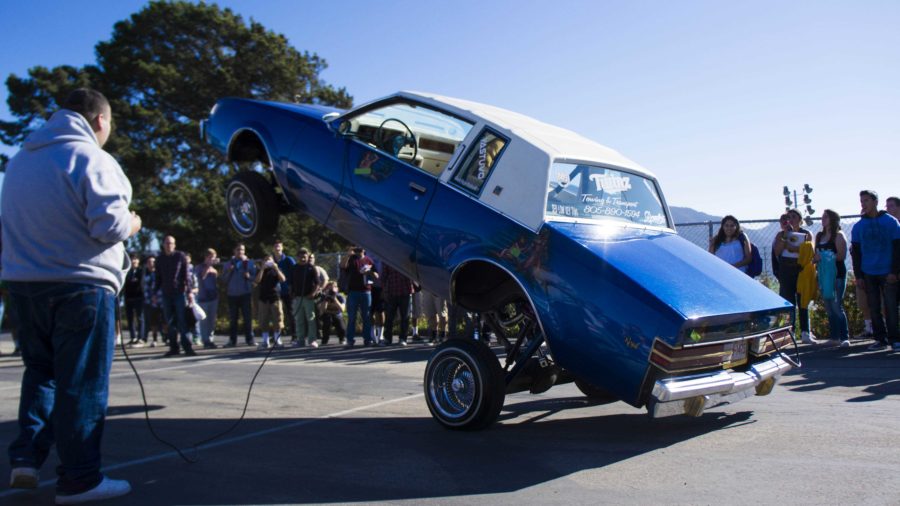 Students gather around to watch a hydraulic system launch this car up into the air.

The smell of gas wafted in the wind, music blasted out of speakers, and the sweet sound of engines roaring resonated everywhere and filled the atmosphere at this year’s Cam High Car Show during lunch.

An enormous array of cars came and represented their brands. From student owned cars to dealership models, there were plenty of cars to overwhelm any gearhead with adoration. The Swift Car Club brought three models of their pimped out army. The Mercedes-Benz dealership brought two of its most luxurious 2014 models. Lexus of Oxnard also made an appearance with a Honda and Lexus model from 2014.

Of course the Car Show wouldn’t be complete with student owned cars to judge to see who had the nicest car in all of Cam High. A few of the contestants were Tom Guerrero, Kirsten Randall, Alfredo Lomeli, James Cruz, Genevieve Hoffman, and Micheal Gesser, all seniors. They all brought something unique to the table with no two cars the same model.

Devin Altman, senior, said,”There is a great turnout this year. I think the vintage cars that were here are the things that brought all the students out today.” He complimented a lot of the cars that the students brought but his favorite was James Cruz’s 1967 Dodge Dart. “He has been putting a lot of work into it. I like the nicely restored engine that he has.”

Micheal Guesser, senior, brought his turquoise 1964 Ford Ranchero. “I like being different and that’s why I like having this car. I’m constantly learning new things about cars and having new experiences when I work on my car,” said Guesser.

The Cam High Car Show showed the variance between the old and new.

The Stinger will be posting a more in depth story on the different cars soon.