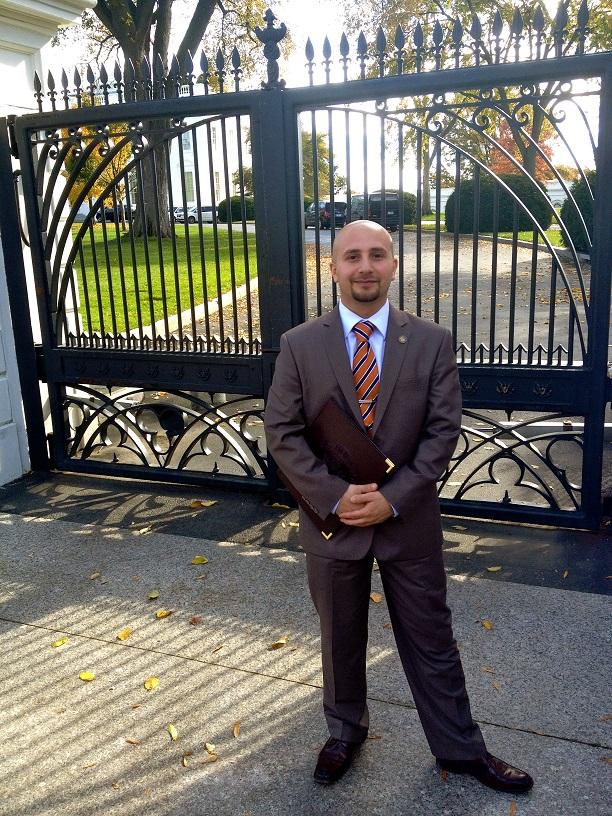 Antoine Hage, standing at the gates to the White House

Antoine Hage, a Cam High alum, visited the campus to explain his life after high school and advise students on how to prepare for college.

Hage, from Lebanon, received his US Citizenship during his junior year at Cam High, a benchmark in his life that prompted him to “tote his passport all over the place.”

Hage submitted his application to the Cal State University’s internship program and from the pool applicants at each of the university system’s campuses, was chosen. He was assigned a position with congressional representative David G. Valadao, Republican, from the 21st district in California’s Central Valley, and shipped off to Washington D.C. after pre-training in Monterey Bay, California. Hage worked on Capitol Hill for three months before returning back to California.

“It’s a good experience because you get to rub shoulders with congressmen (and other interns),” said Hage. “I’ve always been interested in politics and every little thing you do makes you feel like you made a difference.”

While people across the nation may not realize it, Washington D.C. is “a city run by interns and depends on interns,” said Hage. Each congressional representative has, on average, three interns-making their numbers higher than the representatives for whom they work.

Part of the internship requires participants to write letters back to constituents who write their representatives. Other tasks include preparing briefs and sitting in with congressional representatives during their meetings, the same briefs and meetings where new laws are proposed and discussed.

Interns in Washington D.C. must also manage the social media and public relations of representatives. “Social media is something very important to take into consideration,” said Hage. Part of that task includes watching what constituents post on social media, updating the Tweet of the Day, which is the featured tweet selected by the representative, replying to constituents, recording phone calls, and preparing statements for issues the representative must tackle based on what people are talking about.

Hage had one piece of advice for seniors about to graduate: “Get involved, get internships, even if they are free” and that “it should be something you are passionate about, and willing to make a life-long career out of it.”