A Wardance Against the Spartans 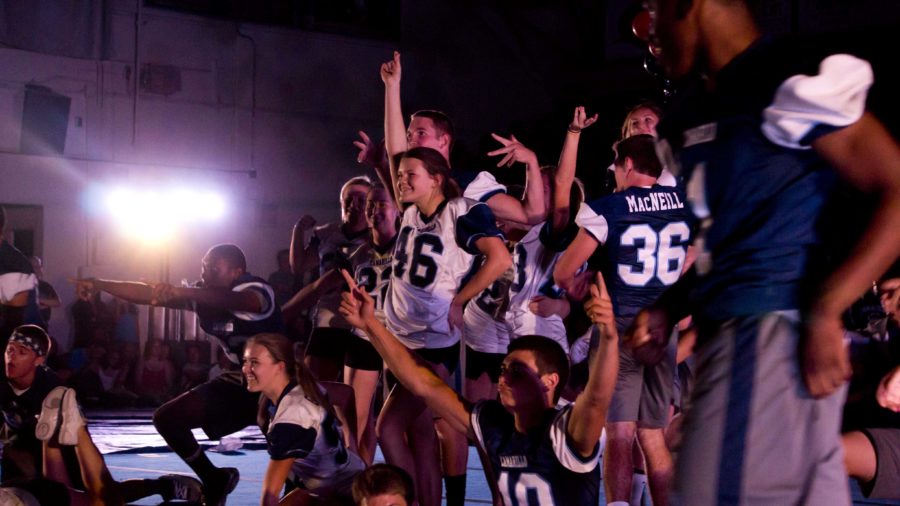 The Cam High football team and the cheer team perform in front of hundreds of students at the Rival Rally.

School spirit filled the Scorpion Dome during a rally on November 8th as Cam High students caused an uproar in preparation for the final football game of the season, a head-to-head match against Rio Mesa.

According to Jonathan Chua, junior, the music was the most exciting part about the rally. “My favorite part was the DJ. He was really energetic and funny. I remember him from homecoming too. He’s really awesome and the music he plays is very hip and modern and everybody loves it.”

T.J. Jose, junior, believes that school spirit is something any high school student should have. “Since I’m going to the football game later tonight, I wanted to get into the spirit,” said Jose. “I’m going to the Scorpion Cyclone too, so that should be really fun. And during the loud rally, I practically lost my voice from shouting and screaming so much. The rally was overall really fun and I hope we have more of these activities at our school.”

Danny Cachin, junior, enjoyed being with his friends during the rally. “My favorite part of the rally was when the short flags did their routine,” Cachin said. “I also liked it when the cheerleaders and the football players collaborated in that one performance. That was really creative in my opinion. I also thought the DJ’s laugh was kind of funny.”

“The loud noises during the rally were very adrenaline-pumping”, according to Anthony Lopez, junior.”Walking up to the gym was very exciting. The band was playing the school’s fight song on the way up and everyone in the hallways was shouting. It was all really exciting. I usually don’t go to the rallies, but I’m going to encourage my other friends to go next time.”

Chelsea Barrios, junior, always looks forward to rally days. “I went to the rally because I really like showing off my school spirit. I went all out today. I wore all blue, and I even wore a football jersey. I’m going to the game tonight too.”