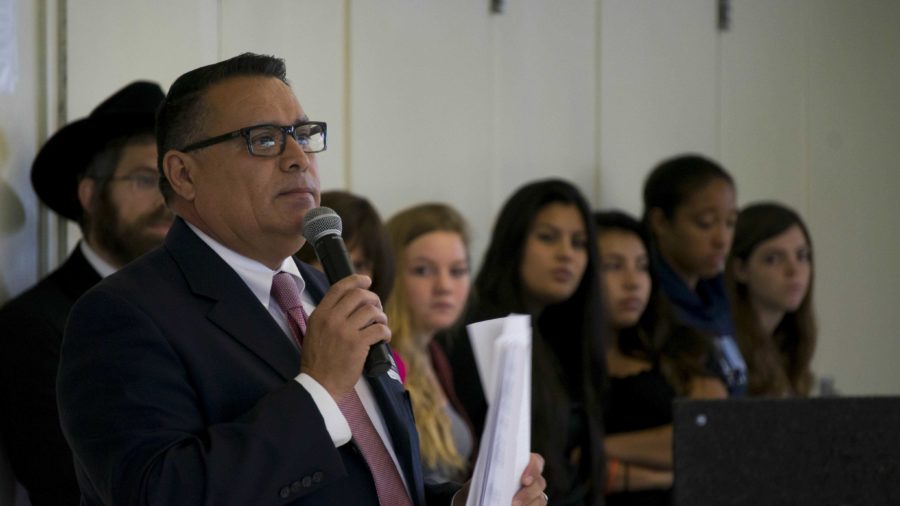 Steven Mora, managing partner of Conejos Mountain Cemetary, discussing the consequences of using controlled substances and how it affects families and friends.

In accordance with Red Ribbon Week, a lunchroom rally was held on October 22nd regarding the dangers of drugs. The rally was headed by Rabbi Aryeh Lang and Steven Mora, managing partner of Conejo Mountain Cemetery.

Lang followed up with the story a man who attempted to commit suicide by jumping off of the Golden Gate Bridge. Before he jumped, the man made a promise to himself that if any one person smiled at him on his way to San Francisco, he would not jump. A newly wed couple asked him to take a picture and gave him a smile, but he still followed through with his suicide and despite his effort, survived the jump.

The lesson Lang taught was that, “no good deed will go unrewarded,” said Lang, and, “any small act of kindness could save a life; ” a subject shared with Red Ribbon Week because it too prevents unnecessary deaths among young adults along with many other age groups.

Mr. Mora explained the effects of drug use that he has witnessed personally as a mortician. “Whatever drug of choice it is, I have seen it. As a mortician, I never want your business. I have worked with over 18,000 bodies in my years and each body I’ve dealt with was more difficult than the last.” He later added that there are about 95 different choices that a parent must make in order to plan the funeral of a deceased child.

Several other stories were discussed by Mr. Mora over the same issues behind teen drug abuse in an effort to touch the lives of people who attended the rally with the same message. “Take care of one another and leave today knowing that we all care about you and we wish you all the best.”