Pope Francis journeys to the U.S. 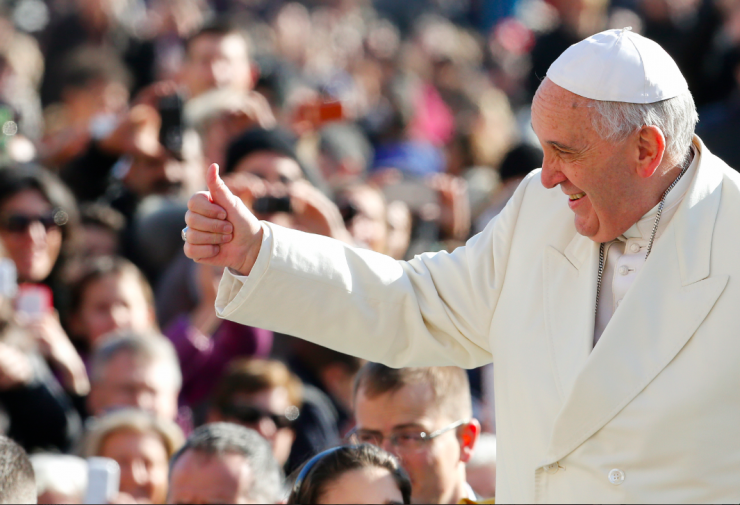 Pope Francis visited America for the first time this September.

Hundreds of people awaited the arrival of the Roman Catholic church leader Pope Francis on the runway of Joint Base Andrew, Maryland, on Tuesday, Sept. 22.

The scene was filled with flying flags and patriotic chanting, encapsulating the excitement and anxiousness for his first steps on U.S. soil. Here, he began the six-day historic route in which he visited Washington D.C., New York City, and Philadelphia.

The Pope’s message touched on several of America’s central controversial topics. “Though there are aspects of American life that Francis embraces, he has quickly become known for blunt critiques of contemporary society and global economics, and his criticism — from capitalism to climate change to technology — spans the political spectrum,” said CNN correspondent Stephan Collision.

Although the Pope was miles away from Cam High, in the country’s major epicenters, his presence was far-reaching to some of the residents of the Camarillo community.

Mariah Perez, senior, said, “I try to follow what the Pope has to say. He is a huge influence in the Catholic religion, but I do take everything he says in perspective.”

Fellow senior Samantha Tovar said, “I didn’t have much of a reaction to be honest, but speaking from a non-Catholic perspective, I feel that the Pope visiting the U.S. was a good thing.”

The Pope’s journey began in Washington D.C., where he met a crowd of 11,000 people at the White House for an official greeting. The welcome, as he described it, was, “warm but more formal.”

He later canonized the late Spanish Franciscan friar Junípero Serra at the Basilica of the National Shrine of the Immaculate Conception. Serra founded a mission in Baja California the first of 21 Spanish missions in the state.

Twelve seminarians from St. John’s seminary in Camarillo made a pilgrimage with groups from the Diocese of Orange to witness the event. Senior Kimberly Pineda and her family had intentions to do the same. “If I could have gone I would have,” she said, but the responsibilities of work and school conflicted with his arrival.

Francis again made history with a joint address to the U.S. Congress, the first ever pontiff to do so.

On Sept. 25, those in New York City had gathered in remembrance at the Sept. 11 memorial and museum for the Pope’s multi-religious service at the site of the former World Trade Centers.

Pope Francis arrived at his final stop in Philadelphia, Pennsylvania, making an appearance at the World Meeting of the Families on Benjamin Franklin Parkway and visiting the Curran-Fromhold Correctional Facility, the largest jail in the city.

“[The pope] has so much power to help other people,” said Perez. “He considers people in different situations, and he tries to cater what he says to make [everyone] feel important.”

The acclaimed “People’s Pope” departed the U.S. on Sunday, Sept. 28 at eight p.m., from the Philadelphia International Airport, headed for Rome.

Francis, in the last public statement of his U.S. visit, said, “As I prepare to leave, I do so with a heart full of gratitude and hope.”